We had my brother-in-law, his wife, and a good friend in town this weekend.  The weather was epic - 80 degrees and super sunny.  Noah and I played hooky from work on Friday (actually we both took vacation days but it felt like we were playing hooky) and headed to Bass Lake, a pristine, fresh water lake in the southern part of Pt. Reyes.  We hiked in, jumped off the rope swing, splashed around in the lake for an hour, and then lounged in the sunshine.  It was just like being a kid again and enjoying the endless days of summer. 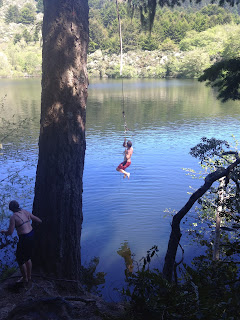 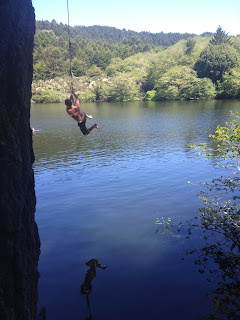 On the way home I was excited to see some fresh rhubarb at a farm stand in Marin.  Rhubarb is an interesting plant.  It's a vegetable that originated in Asia and is quite nutritious.  Fun facts about rhubarb:  Its leaves (not the edible stems) can be poisonous if consumed in large quantities or if distilled to make a poison.  It is also allegedly a laxative, although I don't recall anyone ever commenting on this side effect. 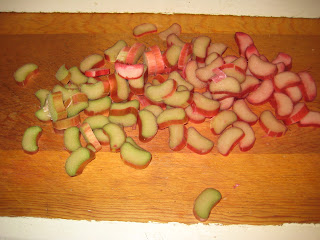 Until a few years ago, my primary experience with rhubarb had been as a dessert – strawberry rhubarb pie, strawberry rhubarb crisp, rhubarb pie.  That changed when a friend gave me a recipe for stewed rhubarb, along with the idea of putting it on yoghurt for breakfast.  I've also been making homemade muesli (which will probably be the subject of a future post as I'm obsessed) and this was the perfect addition. 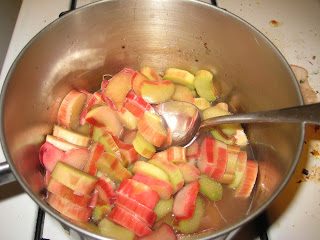 Ingredients
2 big stalks of rhubarb (about 18 inches)
1/4 maple syrup (or substitute brown sugar if you don't have maple syrup.  Honey may impart a funny flavor but feel free to give it a try)
1 tsp vanilla 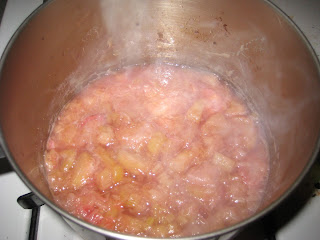 Swirl it into yoghurt and muesli, eat it alone (delicious), or I bet it would even be good on bread or muffins.
Posted by Meghan