My dad was in town this weekend (our third straight week of visitors running!) and we wanted to get a somewhat early start on Saturday.  It was a gorgeous day, and we were headed down to Santa Cruz to visit my dad’s cousin.  Since there would be five of us eating, I didn’t want to be making breakfast until 10:30 in the morning.

I’ve had French toast for brunch the past three weekends.  (I know, poor me.)  I was ready to try something different when I came across this French toast casserole recipe on Smitten Kitchen.  Both the photographs and the idea that I could make it in advance were tantalizing.
I was a little bit skeptical that I could soak the bread overnight and it would not fall apart.  But I made it the previous day at 5:00 pm and didn’t cook it until 9:00 am the next morning, and it not only held its shape, was flavorful and rich.  Noah commented that he had been really hoping it wouldn’t be better than his French toast recipe, but it was.

I made a few changes to this recipe, mostly to make it a little healthier.  You can check out the original recipe and very detailed instructions on Smitten Kitchen.  My revised version is below:

Recipe:
1 loaf of whole wheat bread (preferably unsliced, you should end up with about 14-18 pieces once you cut it)
~1/3 cup brown sugar
~1 tablespoon cinnamon
~½ stick  (4 TBL) of butter
3 cups of whole milk
6 eggs
2 teaspoons vanilla extract
1 tsp cinnamon
1 tsp nutmeg
(Note: I was in a bit of a hurry when making this so didn’t measure out all of the ingredients.) 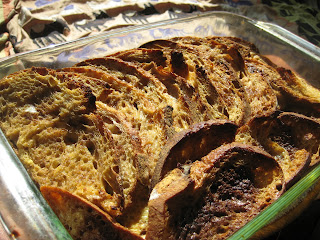