So long San Francisco, for now...

It seems like just yesterday I moved to the Bay Area to attend law school.  I had never visited Stanford's campus or San Francisco, and to be honest, knew an embarrassingly little amount about my new home and so-called career path.  I had just returned from a year in Germany and felt that I needed to do something; so law school it was.  I remember arriving at the end of August and walking through the airport to meet my friend Emily, who picked me up and gave me a home for the night, and many nights over the next three years, and some basic orientation to the Bay Area region.  Palo Alto was in the south, Oakland in the east, San Francisco was much hipper than the Peninsula but the weather was worse, BART stood for Bay Area Rapid Transit, etc.  I don't really know what I would have done without her, for many reasons, but an important one was her driving me all over creation to outfit my dorm room.  I showed up in California with only some clothes and a sleeping bag - no car, no sheets, no furniture, and no clue that the Stanford campus had virtually no food options if you weren't on the undergraduate meal plan.

Even after a day I knew there was something special about this place though.  The glorious, golden sunrise on my first day seemed to be an auspicious omen of things to come.  I have spent three years in Menlo Park and Palo Alto, and five years in San Francisco.  The years have flown by, as time seems to do the older I get.  I remember my great-grandmother telling me this would happen, and although she must have been in her 80s at the time, I am beginning to comprehend (and rue) how the seasons and years begin to blur together.  In that time I met my husband, and managed to graduate law school and find a job.  We did such a good job exploring this region over the next five years that my bucket list has been pretty short, and mainly consisted of restaurants I wanted to revisit, going to see the baby tiger at the zoo, and visiting the Armory.  None of which I did, but so it goes.

We have done a lot of packing these past few weeks, and all the usual logistics, coordination, and odds and ends that go with moving.  Our bouts of productivity have been interspersed with various trips and outings, savoring our last months and weeks and days in the golden state; spending as much time as possible with our friends and family here; and even taking our first camping trip as a trio to Andrew Molera State Park in Big Sur.

I came to California alone, and eight years later am leaving with my husband, our baby boy, two cats, and the baggage (literal) that we have accumulated along the way.  We are headed to the land of enchantment, colloquially known as New Mexico, where we will be working and doing some homesteading in a little canyon outside of Santa Fe.  The change is scary, but also energizing.  We are looking forward to exploring a different place, living in the mountains, and having some land.  Eight years in an urban environment has changed me though, and I am going to miss the bustle and hum of the city, walking and taking public transit as opposed to driving, and living so close to so many dear friends.  I'll keep you posted on how the next chapter goes.

I've taken a lot of photos of our recent adventures, but packed away my cables to download them from my camera.  Here's a smattering that was on my phone.  I may post more later once we've unpacked and settled into our place. 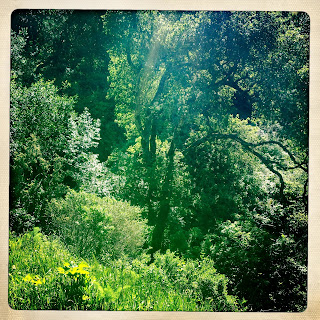