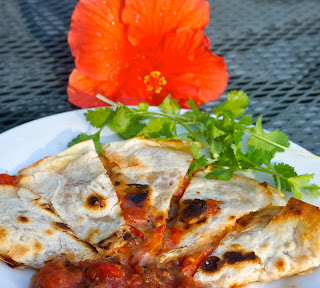 You would think I lived in Phoenix, Arizona this week not lush, breezy New England. We have had heat wave after heat wave. Days of it at a time and the last thing I want to do is cook, not even on the grill. Today it is almost clearing 100 degrees and I am sitting here just trying to stay cool. This is the hottest July ever here in the Shire according to today's weather blast, and I must agree.

But I still must eat so every night I have made myself Quesadillas. They are simple to make, delicious, inexpensive, classy to serve, and best of all I get to use fresh produce from my garden. I tried various fillings but my most favorite is fresh tomato, onion and cilantro. In ten minutes I have a meal. And, yes they are even yummy if you are not in a heat wave. Serve with salsa.

2  ten inch white or whole wheat flour tortillas. You get quite a few in one package to last all week.
2 medium to large tomatoes chopped
1 small onion sliced
1 handful of cilantro chopped
1 cup of shredded cheese - I use Cheddar

Slice a small onion and two medium size tomatoes. Saute these in a small pan on low to medium heat in a bit of olive oil until they are soft and the juice from the tomatoes thickens. Add a handful of chopped cilantro. Remove from heat and cover. Cilantro will soften from residual heat. Set aside.

In a 10 inch frying pan add enough olive oil to cover the bottom of the pan. Let the oil heat up over medium heat a bit but watch it carefully. Add one tortilla. With tongs, turn the tortilla every ten seconds until it is golden on both sides. Turn heat down to low. Spread on half of the tomato mixture ( it should be a thin layer) over the tortilla and  add half of the grated cheese on top. Fold the tortilla in half and press down lightly. Cover the pan for a minute or two until cheese melts.

Remove to dish and cut into four pieces. Enjoy!