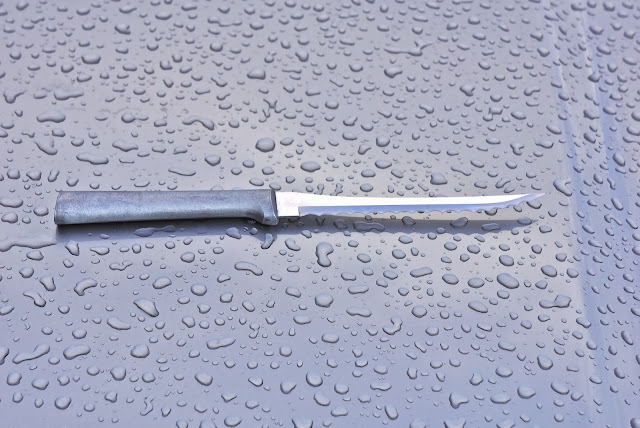 On my return trip from upper Vermont, I stopped at a local fair. I am not sure why I stopped but something lured me in. Perhaps it was the beauty of the village green, perhaps it was the quaintness of the town, or more likely it was the huge green sign that said FROG JUMPING CONTEST. How could I miss that! I watched several young children and three adults remove their prize frogs from their shoebox and try desperately to control them on the starting line. As I waited for the fun to begin, a sweet woman next to me pulled out, from a paper bag, a small serrated knife and told me I should run over "there" and get one. "The best knife I have ever owned"she said. She told me it was called a tomato slicer but its uses expanded far beyond that. She said it cuts mushrooms as thin as paper, shaves kale off the stem, and substitutes as a bread knife. And she continued, "it lives up to its name the best Tomato Slicer ever". How could I refuse such a pitch. She told me to hurry because there were only three left. I raced over to where she pointed and for a mere $6.00, I picked up the best stainless steel knife ever. It never has seen the inside of a drawer but sits like royalty on my cutting board. I use it on everything. So now I recommend it to you and no I do not get any payback from doing so. I honestly think it is terrific and it would make a great present for any cook or foodie. Oh, and as for the frog jumping contest, Buster won.