I headed out to Full Belly Farm in the Capay Valley with various friends and family members this weekend, to celebrate the birthday of a friend. I love visiting Capay. It’s a narrow valley ringed on both sides by high hills. There is a creek that is big and deep enough for swimming and the valley is also home to some of the oldest and best organic farms in California. Driving into the valley I pass cultivated fields, pastures, orchards, and wild meadows. This is a particularly beautiful time of year, as the almond trees are in bloom with delicate pink blossoms. 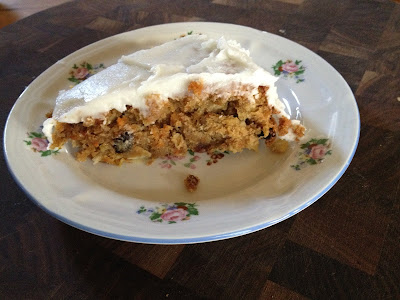 I made this vegan cake for the birthday party. As far as I knew no one was vegan (having daily access to delicious milk from happily pastured cows is probably somewhat of a disincentive) but my brother and his girlfriend both gave up dairy for Lent. Neither of them are Catholic, but express an appreciation for the self-discipline and gastronomic creativity that the 40 day sacrifice requires. Both also have birthdays coming up this month.

I’m usually a little skeptical about vegan desserts, especially when they require a lot of processed substitutions. For example, many recipes I looked at suggested cooking with margarine instead of butter. After some googling, I found this carrot cake recipe. I followed it almost exactly with two exceptions: I didn’t have raisins so I substituted half a cup of dried cranberries. I also grated too many carrots (about ½ a cup too many), but threw it into the cake anyway. 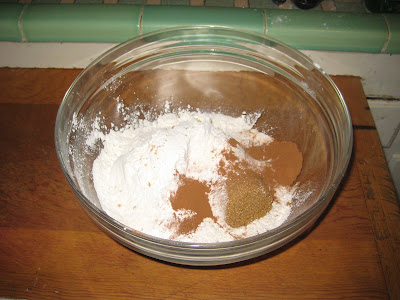 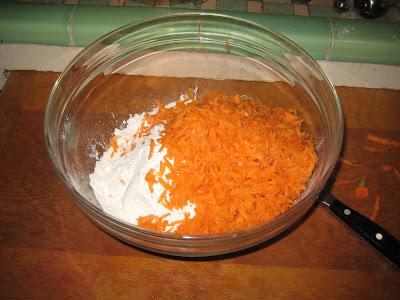 One of the nice things I discovered about vegan batter is you can eat it without any fear of salmonella. I sampled this batter generously to ensure that it tasted as delicious as it smelled. And it did. 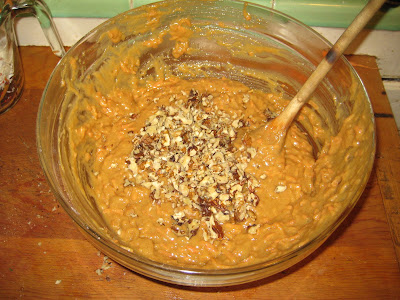 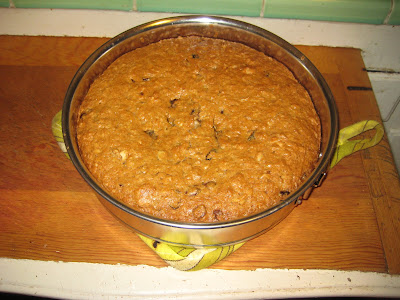 I also needed a vegan frosting. I am sure I’m in the minority here, but frosting is my favorite part of cake. I looked around for some recipes but wasn’t satisfied with anything I saw, so decided to strike out on my own and came up with a fairly simple coconut frosting recipe.

Mix until creamy and smooth. You can refrigerate this until you are ready to use it, but it will harden up. You should let it soften for a few minutes before spreading it on the fully cooled cake. I really don’t know how these three basic ingredients can be so delicious but however tasty, I probably shouldn’t have been eating the frosting like yoghurt. 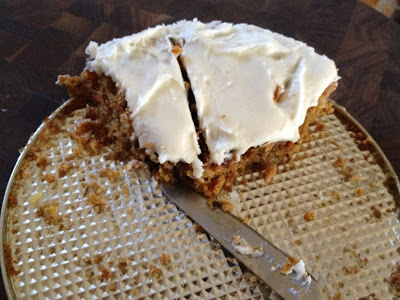 The 40-day vegans both had seconds (as did I). The cake was dense and flavorful, with the various tastes and textures (cranberries, coconut, carrot, walnuts) playing off each other and making each bite interesting. This will be my go to carrot cake recipe from now on.
Posted by Meghan