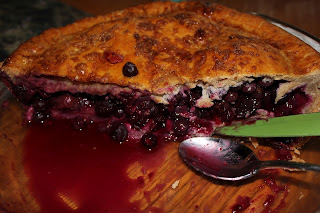 I can't believe it's already been a week since I returned from CT.  I'm already homesick for the farm, our pets, my parents and friends, and of course, the amazing blueberries that were already ripening at the end of June.  For the non-agrarian folk, that is three weeks ahead of schedule!  Which reminds me of an article I saw yesterday making its way through facebook and the blogosphere, stating that the odds of the freakishly hot weather across the United States being a completely random event are somewhere between 1 in 100,000, or 1 in 1,600,000, depending on which source you rely on.  (And it goes without saying that I would of course prefer no climate change to my premature enjoyment of blueberries.) 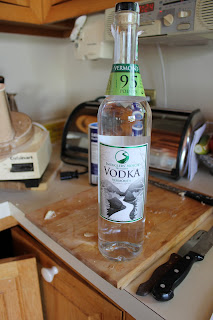 But since they were there, I refused to waste nature's bounty and each day would pick the bushes clean of the early ripening fruit.  And on our last full day in CT, I set out to make a pie.  After harvesting a couple of blueberry pints, I began researching various crust recipes.  I found some links to the Cooks Illustrated Foolproof Pie Dough, with the very surprising (to me at least) ingredient of vodka - a 1/4 cup.  I'm not sure what role the alcohol played in the pie crust but if anyone knows offhand and wants to save me the search, that would be great.

I'll be honest - I'm inordinately proud of how my pie crust came out.  Maybe it was beginner's luck.  Maybe I infused it with a lot of love.  Maybe it was the humidity.  Who knows.  Whatever it was, it worked.  Rich, buttery, crisp outside and chewy inside.....Anyhow, here is the recipe.