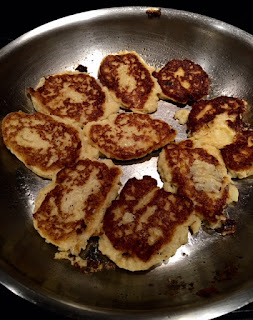 Finally, I discovered a way to enjoy cauliflower. Granted, I am a sap for anything that says crisp in front of it but this recipe is truly a delight both hot and cold. Hot I had with applesauce on the side and cold, well, I just grabbed some out of the fridge for an on the run snack before work. I must admit to you though that the word crisp used here is a bit deceiving because these actually never crisp up like a gingersnap but the outside does brown nicely enhancing the flavor of the cauliflower cake. And they are nutritious. Hmmmm I wonder how they would be with Mead's Maple Syrup for a morning breakfast?


You can add whatever other ingredient you would like to this recipe to make it more vitamin rich such as carrots, mushrooms, garlic, or red pepper. Just make sure that you chop well and sautéed lightly first before adding.


Drop it by the spoonful in small bit of well heated olive oil or canola oil and cook for about five  minutes on both sides until browned.